Industrial designers sometimes get their persona profiles wrong by passing off their expectations and values of their fictional character as its own, or they create a person with circumstances too convenient to justify an intended product. It is easy to do, but the complexity of developing a ‘one size fits all character” was proven when a couple of UniSA industrial designers were introduced to a personality that caught them completely off guard.

The character’s name was Houdini.

Houdini is the child who can escape out of any given situation; some say when nobody else is looking, he can perform feats that defy his age, size, strength and intelligence.

Everyone believed he was a myth, but parents have come to know better.

To hear the principal of Christies Downs Special School explain his amazing exploits with deadpan expression- quickly made a room of dubious I.D. students, believers.

One story she told was a mind blowing act that still leaves staff baffled to this day.

Isolated and locked in virtually a bare room, without the assistance of any furniture, Houdini managed to remove the fluorescent tubes from the light fitting. Given his small stature, it was seemingly impossible for him to reach the ceiling. Nobody knew how he did it, and this was part of his enigmatic character.

Houdini was a child of no particular gender, age or motivation. He was a caricature of someone coined as unpredictable, resourceful, persistent and not to be underestimated in his immediate environment. These traits would ultimately make him an incredibly challenging element in a real design project.

Houdini’s containment bed in use was terrible to say the least. Adorned in shades of vomit beige and bearing some resemblance to an enclosure for the insane, it was completely understandable why a child like Houdini would garner such enthusiasm to escape. 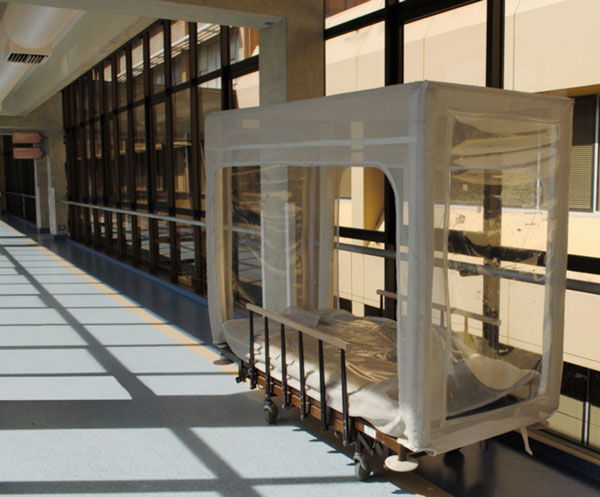 When Jane Durbridge, our liaison for the Women’s & Children’s Hospital, first approached the students to redesign a specialised hospital bed to contain Houdini safely, everybody was in for a unique and eye-opening experience.

After a long four months of research and gathering feedback to establish a profile of our beloved escape artist and better understand the habits and behaviours of those that directly dealt with him, most students did not have the fortitude to persevere on the project.

But two young women showed girl power and accepted the challenge. Developing close relationships with the user groups, they felt comfortable enough to continue the journey and further attempt to unravel the mystery that was ‘Houdini’.

Melissa Sopel and Kendyl Katzenburg found Houdini was one of the most difficult personas they ever had to design for. He could range from two to seventeen years of age, he might have autism or another intellectual disability and possibly be prone to seizures.

Whatever his circumstances, Melissa and Kendyl were determined to find a solution, a happy medium between containing Houdini without feeling trapped, whilst simultaneously help those that minded him interact with the bed efficiently and safely. 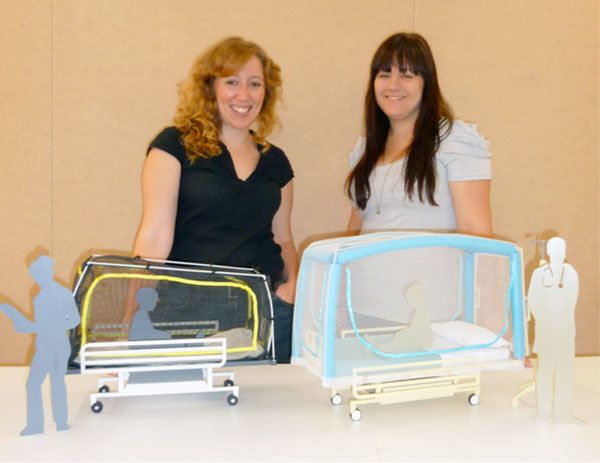 While both students feverishly worked away sketching designs and made foam models and mocks ups, each followed a different philosophy that in due course would shape their final design.

Kendyl’s concept was a reflection of empathy, understanding the discomfort and anguish Houdini felt from being confined in a big, scary plastic box, a padded prison that felt unfamiliar and claustrophobic. Her final design represented a tent, a fun play on escapism which was core to Houdini’s persona, perhaps when placed within this bed, Houdini would perceive it more as his own playful domain; his little castle, an intimate space just for him.

Melissa focused on the staff and others who interacted with the bed. Houdini had close contact with many members of the hospital and people he knew personally, so access was a key issue. If Houdini was to succumb to a seizure, the staff could act fast and quickly gain access to tend to his needs.

Hygiene also played a primary role in her design; though her attention was firmly with providing convenience to the staff, small details exclusively for Houdini were included, namely the bed having a much softer form making it less intimidating and using a blue scheme as the calming colour of choice.

As the hospital reviews both concepts and the dark circles of sleep deprivation slowly disappear from the designers’ eyes, Houdini will forever be a sober reminder that there are user groups designers might never entirely understand and projects we may not be able to completely resolve.

Riddles like ‘Houdini’ furthermore exemplify the role of industrial designers, illustrating the importance of how products should not only address basic utilitarian needs, but also seek to meet the emotional requirements for the user, to encourage them to embrace the product, rather than tolerate it and readily integrate it into their life.

Did the two designers really address the most prominent needs for Houdini?

Possibly- you might be better off asking him, but you’ll have to find him first…