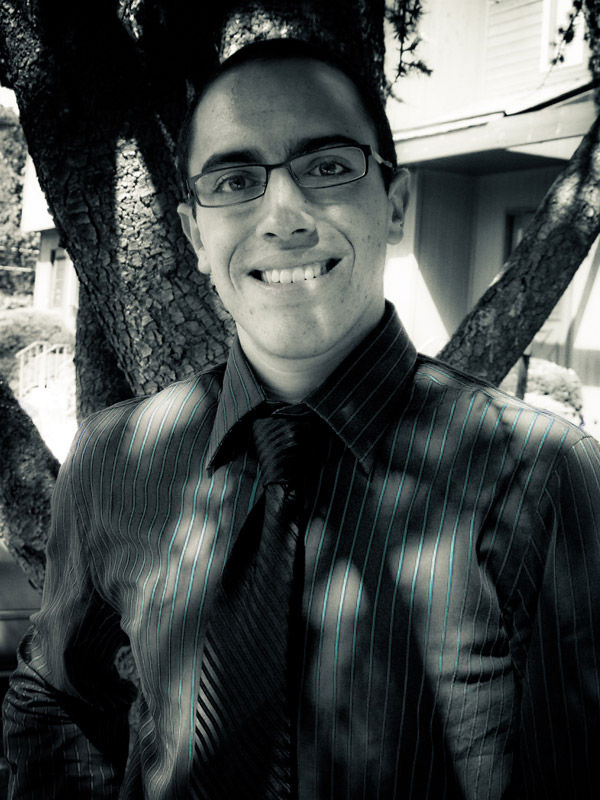 In this critical interview Jonathan Caro, currently undertaking an MA in CAD Design, gives us a great insight into student life as a designer in Nottingham, England. Jon is currently turning company logos into massive building structures in future cities. Sound bizarre? Well read on and find out more! For more information about Jon please check out:

Hi Jonathan, welcome to Embody 3D and thank you for taking the time to talk with me today. To get started could you please give me a quick introduction to yourself and what your up to at Notingham Trent University in the UK?

Where and what did you study before deciding to go for your MA? How did you find that course?

I acquired my Bachelors Degree at Fairleigh Dickinson University in Madison New Jersey.  FDU was my choice because 10 years ago it was difficult to find a four year school that offered a degree in 3D animation, FDU was one of the few if not the only in NJ that offered a four year degree in the field.

Why did you decide to continue studying than rather than perhaps pick up a job or work experience?

I graduated in May 2008 then in August started working for a small visual effects house in New York City.  It was an amazing experience I produced CGI assets and environments for Crime 360 a reality detective show on ABC, and did some work in beginning of 2009 for a commercial with the same studio.  However, the recession hit, work dried up and I found myself with only being able to snag a weeks worth of work on a construction job on a airport runway.

Realizing that no one would hire a recent college grad (after applying for a teaching job at a votech school, I got as far as Dean approval then was denied the position only on the point of not having 3 years professional experience in the industry)  I needed to continue my education, and separate myself from the masses of people with BA degrees in my related field. 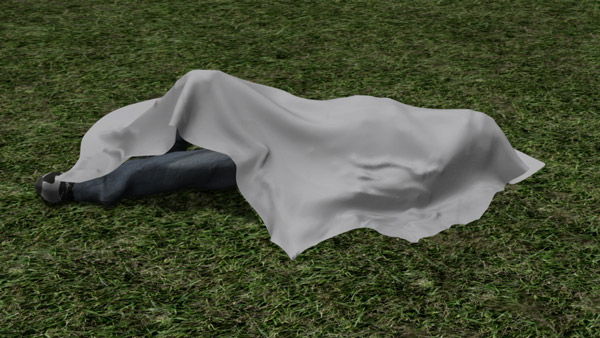 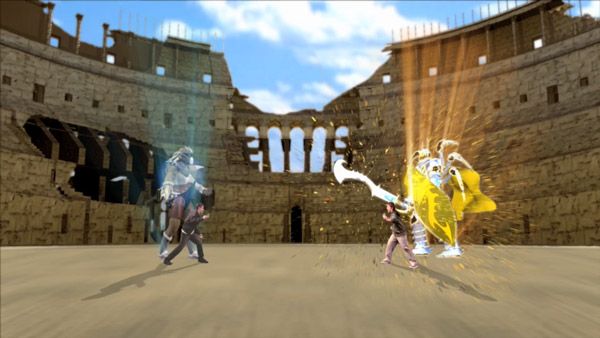 Is there any particular focus of your MA?

My MA project focuses on the representation of architecture in 3D environments.  Mainly I have been envisioning company logos as mega structures set in the future.   I’ve created a Hybrid Theory of practice combining product design techniques as well as 3D art techniques and I’m aiming this methodology at the film and video game industries. 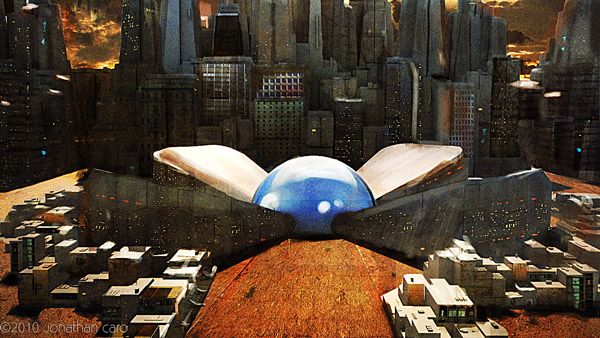 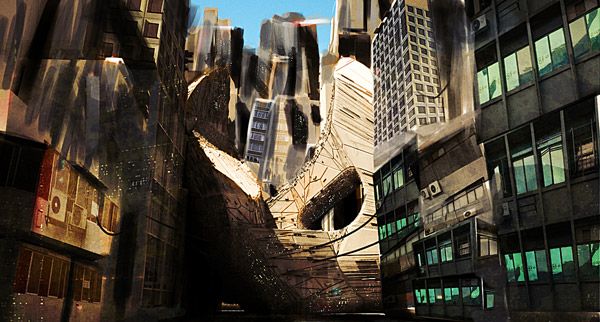 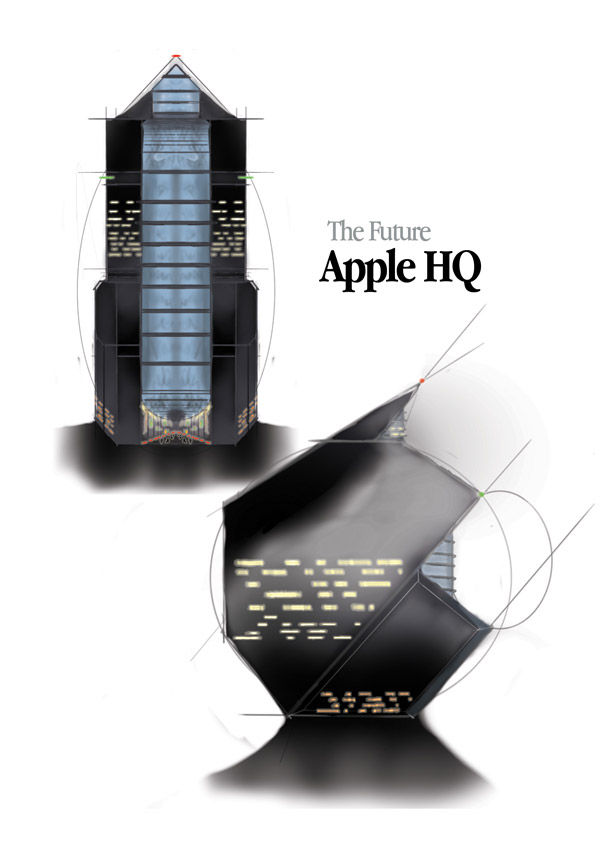 In your education thus far what courses are you finding most beneficial, challenging and interesting to your learning?

The most beneficial courses have been the MA Product Future’s courses, they have really opening my mind to establishing research context into a product before even moving to the design phase.

The most challenging aspect would be the time spent in the workshop, as I haven’t touched blue foam since sophomore of high school.  Its been an amazing learning experience being able to visualize my 3D models off screen, in my hands. 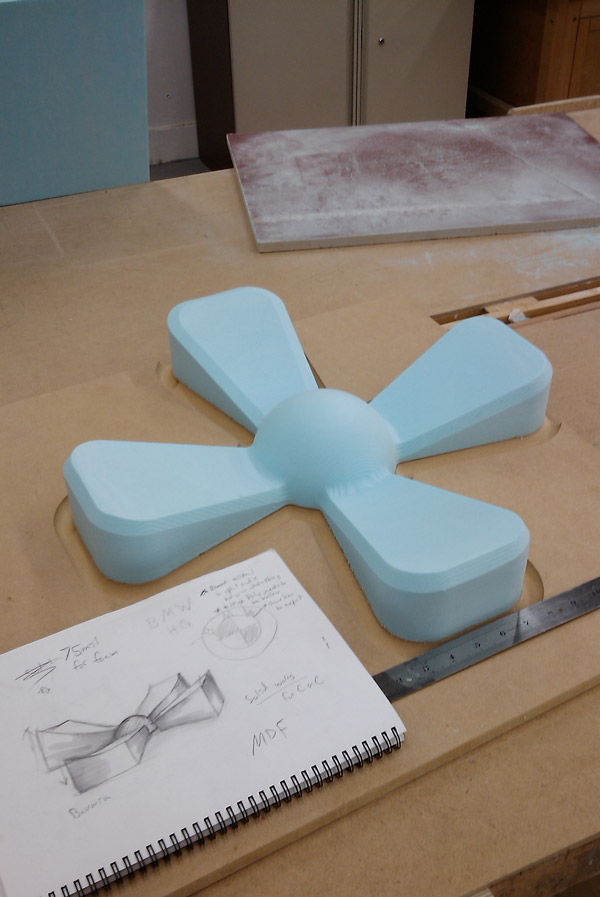 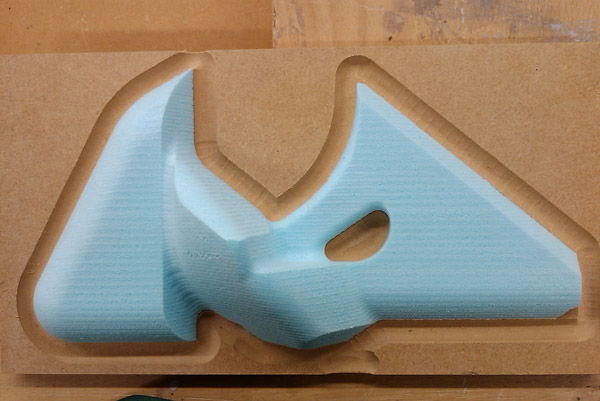 Some interesting lectures come from the MA department as a whole, which include Fine Art lectures, graphic design, and fashion.

What’s student life like? Is there a big design scene around the university? Is there much industry support and collaboration? Any crazy design parties that we should know about?

The whole of Nottingham has a rich history of art in its roots, but as a design community standpoint not so much.  Out of the whole MA art & design school Product design is only 12 people including me, so not much ‘design parties’ happen.  As for Industry and support, as part of my MA I have been working on a playground design with Bandai-Namco Japan, and Gamecity UK (in part with Nottingham Trent University).  It has been an interesting case study because it is a fuse of video game industry and product design which coincides perfectly with my project.

Once studying is over what type of work would you like to be involved with in the future? What is your dream job?

Well every 3D artist’s dream job is to work at Pixar, Dreamworks Industrial Light and Magic, Blue Sky studios, etc. any big time 3D production company.  But now that I’ve been undertaking the shift from 3D Artist to 3D designer I would love to work as a 3D render for an architectural firm in New York City.  Envisioning CGI structures based off vigorous research and design methodology.

Do you have any general advice for students still in senior high school who are perhaps considering studying a degree in industrial or computer aided design?

The one thing I always tell everyone is to LOVE what you want to do.  Be involved in the design community, post in forums, read industry leading news, stay up till 4 in the morning working in your favorite CAD program.  Open a Twitter account and use it to follow lead designers, studios, etc. Be interested in your field.

When I was in middle school I wanted to be a Paleontologist, when I realized all dinosaur bones would be dug up when I’m older, thats when I saw Toy Story in high school and wanted to create pretty pictures in 3D. Now after a BA and undertaking an MA, I want to be noted as a 3D designer, but the same passion and willingness to learn about Dinosaurs as a 10 year old, is still with me today in the field of design.

What would you consider to be the best and worst aspects of the computer aided design work?

CAD work can be a double bladed sword at times, because the software can be limitless in its power but limited by its possibilities/hardware. The best aspect is the blank 3D space, the X,Y, & Z.  Your viewport is empty its yours to fill, and its mostly like working with clay outlining basic primitives (objects) and using subtractive or additive modeling methods to envision your final creation. Plainly it can be just as organic as using clay with your hands. However the flip side to all this is the limits of computer hardware, many times during my senior thesis project have I had to subtract elements from a 3D model in order to meet render times; moreover while working at the visual effects house in NYC when clients brought back revisions CAD work had to be estimated by just how long it would take to render.

As a 3D artist my workflow was 3D Studio Max, render with mental ray, composite in after effects (for animation) or photoshop (for stills).  As a 3D designer my workflow consists of sketching in Autodesk Sketchbook Pro, modeling in SolidWorks, adding additional detail to CAD model in 3D StudioMax render in V-ray (within max) then composite in photoshop.

Solidworks seems to have more of a straight forward modeling mechanic then max does.  Intersecting objects to create unions/booleans is cleaner in solidworks as opposed to 3D Studio Max. Material editing and rendering isn’t powerful enough in SolidWorks, hence where 3D Studio Max with V-ray come into play.

Before you start modeling any shape or object in CAD is there any particular design process you apply to the project?

The first part of the process is always sketch out model on paper or illustration software. The pen to paper/ digi-pen to wacom tablet method always aids in generating an Idea for a CAD model fast and efficiently. When looking at that blank viewport in CAD software ‘X’ I always try to break down what ever the product may be into general shapes, spheres, rectangles, triangles, cylinders, etc. this aids me in understanding what makes up the general appearance of the product.

A lot of the work in your portfolio appears to have a real game design feel. Do you think there is much crossover between being an ‘industrial designer’ to being a CAD modeler for a game company?

I think the crossover is exactly what the film and video game industry needs! Industrial designers have a background and knowledge that doesn’t get fully realized as a CAD modeler in a game company.  Sure CAD modelers do some basic research as to what a game asset, or environment may look like, but its that unique research methodology which industrial designers bring to the table that could take the video game and film industry to the next level.

If a CAD modeler can understand the context of what they are modeling, such as the Architectural influences of certain structures, or the ergonomics of a chair, or weapon, the richness of CAD assets would be far greater then what they are today. 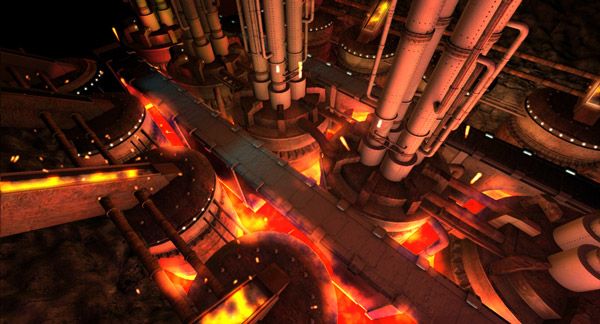 Some of the scenes you have rendered are so intricate and detailed. When designing these complex scenes what tends to take more time, modeling, texture mapping, or finding the optimal rendering settings for the scene?

The most time is spent texture mapping (such as unwrapping UVW’s in 3D Studio Max, then painting the UVW maps in photoshop) lighting scenes (adjusting different lights that coincide with what ever renderer is being used) and rendering.  Modeling should be fast and unobtrusive, let alone the most fun part.  Because it is the bare bone entity of which later gets painted and fully realized in  a render.

Texture mapping can be the most difficult because depending on what the CAD model will be used for (video, print, web) the size of your map needs to fit accordingly.  If outputting to HD a 512×512 texture map won’t cut it, but if exporting for web that may be applicable.  As for rendering its really a touch and go process, tweaking lighting attenuation, intensity, shadow maps, then hitting render is a slow process but the only guaranteed method of understanding the final output. 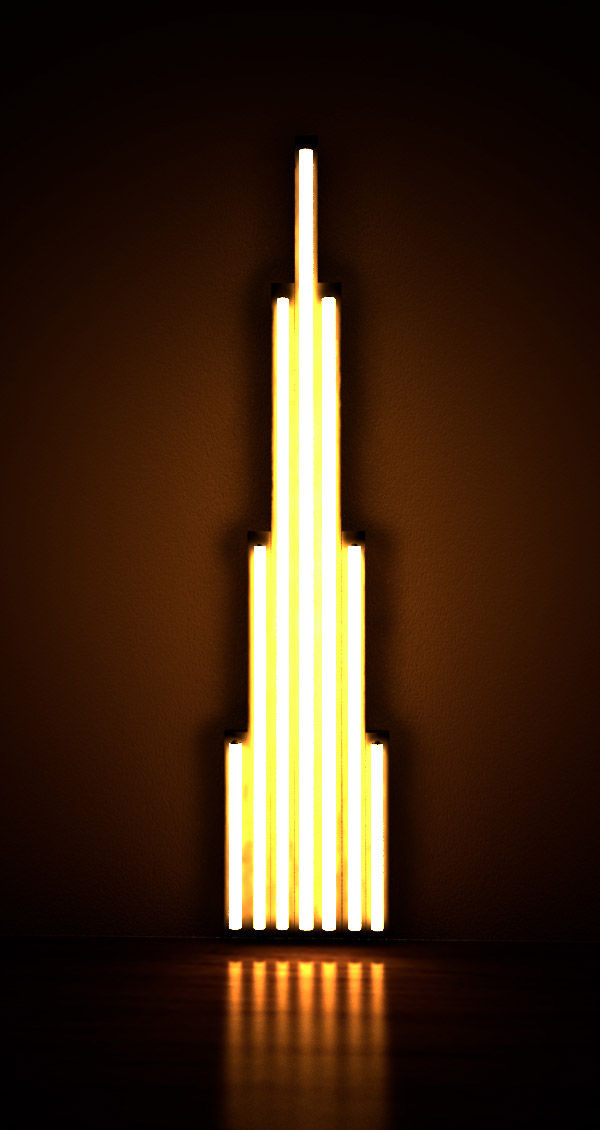 What do you think we will see in the future of CAD modeling and rendering? Are there any particular features you would like to have that aren’t available, or any ways to make modeling more fluid or efficient?

It would be great to start seeing students using desktop rapid prototyping printers. Affordable desktop size RP printers where students can produce a sketch model quickly from their CAD software. Granted these would have to be as affordable as HP desktop printers.

GPU accelerated rendering really needs to be implemented into CAD software, theres so much power in graphics card these days its a shame that the more popular render packages do not utilize a combo of CPU + GPU rendering capabilities. I believe 3D Studio Max 2011 includes this.

As far as the future is concerned, how cool would it be to have an augmented reality render package, where you can see your model in your hands and manipulate it in all directions while the augmented view re creates the lighting of the room your are located in?

I couldn’t agree more about about the augmented reality modeling idea, in fact we even wrote a post about how cool it would be haha!  Jonathan thanks for taking the time to talk with us here at Embody 3D. Do you have any last thoughts for the Embody 3D readers?

Thanks for the opportunity to talk with Embody 3D, I hope that Industrial Design starts to mingle more with the film and video game industries, and that your readers realize that there is more to design then just designing the next ipod.

Embody 3D is proud to promote and support student designers from around the world. If you would like to be featured on Embody 3D’s interview section, please send an email to [email protected]