Have You Been Caught By The Adobe Police? 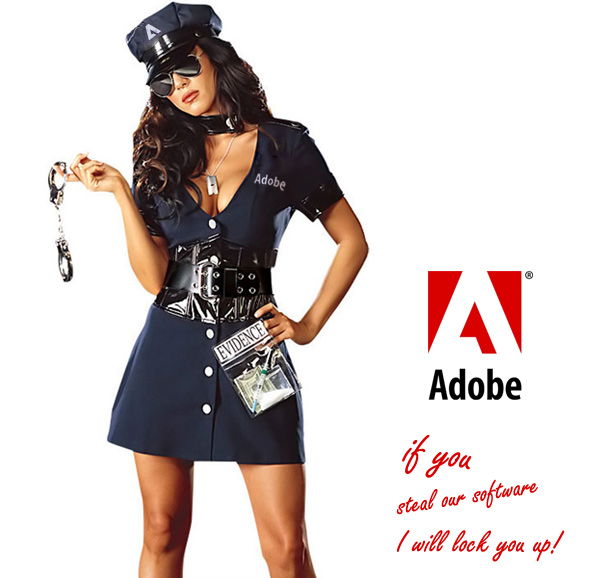 How prominent is software piracy in the industrial design industry? Lets find out together!

In Australia and other western countries baby boomers who once ruled design studios with pen and paper are being replaced by computer savy generation X and Y designers. A generation that understands the importance computer hardware and more importantly design software has on business success and maintaining operational standards. But this is also a generation that grew up with file sharing websites and programs like Kazaa, Limewire, Rapidshare and torrents which have made huge dents in music, video and software company profits. Piracy stalls the innovation and profits generated by these software companies. In fact, the Wall Street Journal (Batson, 2007) claimed that in 2006, $39.6 billion was lost from developers just in America as a result of software piracy. Also, globally it is estimated that a whopping 35% of all commercial software has circumvented purchase.

It is unclear how prominent software piracy is amongst industrial designers and industrial design consultancies. Today I am asking you in this of course anonymous poll have you ever pirated design software for personal or business use. Be honest! Or I will send the Adobe Police after you!

The poll aside let’s look at some of the key reasons why software piracy is so prevalent amongst designers. Although no-one could deny the legality of the practice of stealing software, it could be said that the way software is sold and distributed maybe actually accentuating piracy.

Generation Y has been raised in an environment where stealing music and videos online is natural and acceptable behaviour by their peers. Hopper (2000) states that 48% of American elementary and middle school students think software piracy is legal.

When one purchases a table, one receives a very tangible asset of raw materials like wood, but when one purchases software all one receives is a mere CD/DVD. Many form the opinion that these software companies are just burning millions of these DVD’s and getting away with some kind of profit highway robbery. But we all know that the real cost in development is in the countless hours of highly expertised labour including coders, designers, testers and developers.

You don’t have to tell me, designers don’t get paid much, and software can be frighteningly expensive, especially paid on an annual basis for multiple users. To give you an idea, the Adobe Suite Master Collection is $2599 US or $4344 AU (don’t get me started as to why Australian’s have to pay so much more, last time I checked the Australian dollar wasn’t buying 50 US cents!)

Not to mention more heavier CAD, rendering and analysis programs that can cost in the tens of thousands of dollars. Stealing software allows businesses to gain a competitive advantage over other businesses paying full price for their software.

Now I totally understand the technical argument that as each version of the software is released new features are added making it impossible to standardise the file to work on every year thus far. But so many developers are able to make it work, or at least like Microsoft allow you to save the file to a backward version. What has really changed from Adobe CS2 to Adobe CS5?!? Not very much… Many businesses can’t maintain the annual $20 000 software donation to their respective developers. And it becomes extremely hard to justify this cost when like in Adobe the amount of ‘new’ features you actually get in each upgrade barely enhances your everyday usage of the software.

The Convenience of Piracy

To make things worse for developers the act of piracy is so convenient for users with the abundance of high speed internet, external hard-drives, and an array of free file downloading websites available. Not to mention it is so unfeasible for developers to track and prosecute these many thousands of individuals scattered around the globe. It would just be a legal nightmare to reclaim mere hundreds of dollars from individuals; it is so much easier to sue just one person for millions of dollars. You do hear the odd case of someone being busted for piracy but one must admit these events are extremely rare in proportion to the total thieves.

Also there are issues with licensing. If a small business has 3 CAD users, they often have to pay 3x the regular price. There are of course many volume licensing deals around, but they simply don’t offer a compelling enough case for IT managers and directors to upgrade all licenses of their software once they expire. These volume licensing deals need to be more realistically priced, especially for sole traders and businesses with 5 or less employees.